The fourth Saturday in October is always a celebration in Rolling Fork, and this October is no exception as the good people of Sharkey County celebrate Teddy Bear Day in Mississippi, as it was proclaimed by Governor Phil Bryant for 2018. This year the festival pays tribute to Holt Collier, the noted African-American Confederate scout, bear hunter and sportsman who, while leading a hunt in 1902 for President Theodore Roosevelt in Sharkey County, unwittingly set the stage for the event that originated Roosevelt’s nickname and one of the world’s most beloved toys. 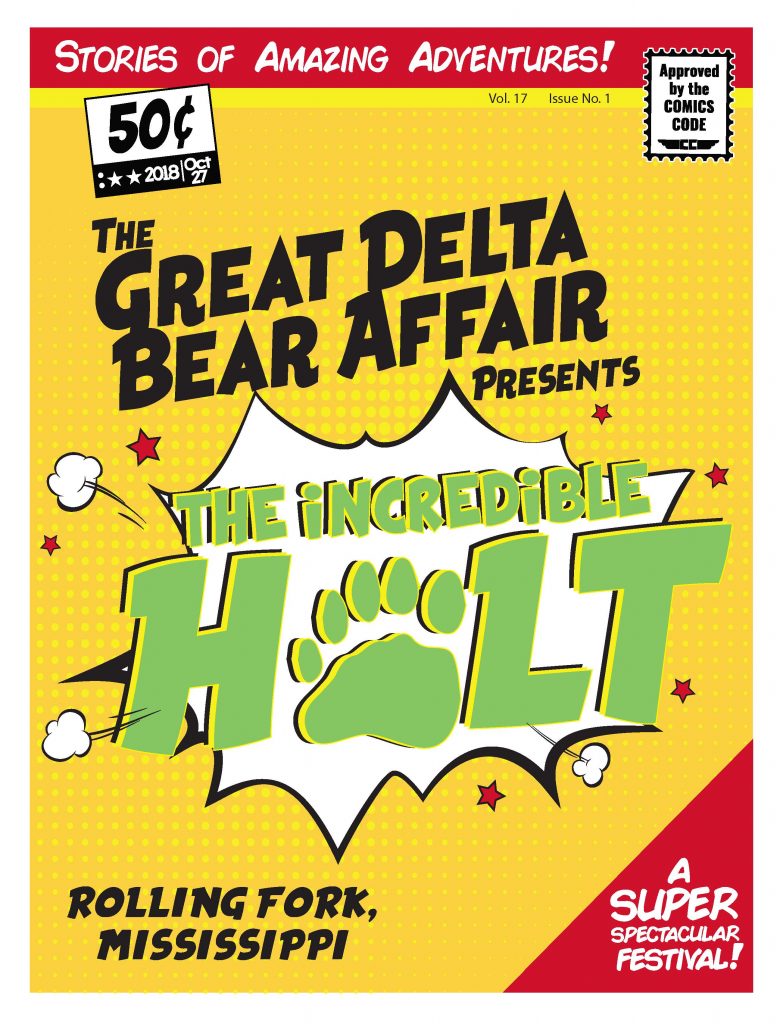 Rolling Fork will be full of costumed superheroes as this year’s Great Delta Bear Affair kicks-off at 9 a.m. on Saturday, October 27 with Holt’s Superhero Run—a 5K run/walk. Cost to participate is $25, and includes a festival t-shirt. Come to the festival early dressed as your favorite superhero and ready for some exercise. Who knows! You may even go home with a trophy.

More about the Fun Run

The Bear Affair’s vendors will also open for the day at 9, with everything from handmade jewelry, photography, metal yard art and soap to hot tamales, chicken-on-a-stick, funnel cakes and all your favorite festival foods available for sale. You will also be able to get some free health screenings and learn about the nature and wildlife of the South Delta.

Then the festival goes to the dogs! Dog owners can show off their pets during Holt’s Hound Dog Hoopla—a fun dog show that begins at 9:30 in front of the festival’s main stage. Participating dogs will have the opportunity to perform any tricks they may have, and/or show off their singing voice in the hound dog howl competition. A variety of awards will be given by our celebrity judging panel.

There is no fee to enter the competition. Dogs must be current with all vaccinations and must be on a leash. Registration for the dog show will begin at 8:45 a.m.

More about the Dog Show

Some real singers will take over the main stage at 10 a.m., as the Bear Affair’s musical entertainment line-up begins with some good old Rock’n’Roll from Jackson-based band The Persuaders. A “combination of three very good bands,” the six guys that make up this band have hundreds of years of collective experience covering some favorites like “My Girl,” “Mustang Sally” and “Sweet Caroline” and are sure to get everyone moving Saturday morning.

At 11 a.m., Rolling Fork’s favorite Elvis, Tim Johnson, will be wooing women and draping his signature red scarves around the necks of fans throughout the crowd as he sings some favorites from The King.

Zach Day will bring his unique “Cotton Country” style to the Bear Affair during the noon hour. The self-taught musician was raised in Greenville, and has more than 20 original songs recorded. His first studio-produced album, “Mississippi Heat,” has garnered attention around the world, even leading to a 10-week tour of Canada.

Guitarist, singer-songwriter Chris Gill and his band The Sole Shakers take the stage at 1:30. Known as one of Jackson’s most entertaining performers, Gill’s songs incorporate elements of Blues, Rock, Reggae, Folk and Dance music.

GDBA organizers are excited to welcome J.J. Thames to the festival’s stage this year. Thames’ live shows are said to be the stuff of legend. She honors the bold Blues women of the past—with her heart on her sleeve, she belts, growls, shouts, croons and moans from a place deep within her soul that harkens back to the days of Chess, Bluebird and Stax Records. She is the “leave-it-all-on-the-stage” front-woman of the Violet ReVOLT—an eclectic mix of seasoned musicians who, underneath deeply southern juke joint stylings, weave a mixture of Gospel, Hip-Hop, energetic 90’s and Southern Rock and Blues with vintage Soul melodies. You are not going to want to miss their 3 p.m. set.

With the 2016 release of their fifth studio album, “Duende,” the Band of Heathens emerged as the epitome of the Americana music genre. Then, in late 2017, the band recorded their own version of the classic Ray Charles album “A Message from the People”—paying homage to one of the most important voices in American song history. The Austin, Texas-based band will headline this year’s Great Delta Bear Affair, performing on the main stage at 4:30 p.m., in what is sure to be another “don’t miss” performance.

And, of course, closing out the Great Delta Bear Affair’s on-stage music at 6 p.m. will be The Grayhounds. Fronted by Rolling Fork native Willy Bearden, The Grayhounds have become the festival’s “house band”—ending the day’s festivities with “Memphis Women and Chicken” and lots of dancing. The band also features local natives Clark Secoy on drums and Jim Logan on saxophone, as well as some new faces from Bearden’s Earnestine & Hazel band who will sit in with The Grayhounds this year.

There’s only one place in the world you can experience a Chuckburger eating contest, and that’s at the Great Delta Bear Affair. Eight contestants will try out their competitive eating skills on the signature chili and slaw-laden burger from Chuck’s Dairy Bar in hopes to win the coveted trophy—and $100. The contest is held on the main stage at 11:30 a.m. Once the burgers have been eaten and a winner named, the stage opens for an afternoon of music.

Fun and Games for Kids

There will be several other events during the day including fun games for children, Terry Vandeventer and his Mississippi Snake Show, chainsaw woodcarving by Dayton Scoggins, archaeological mound tours led by Sam Brookes, the presentation of Delta Film Institute’s short documentary on Holt Collier, and it all culminates with a fantastic fireworks show by Pyroshows after dark.

View all Things to Do

The Great Delta Bear Affair is known for having fantastic live music and this year is no exception. The festival committee has put together a great lineup including country, blues, Americana and of … END_OF_DOCUMENT_TOKEN_TO_BE_REPLACED